Together, this past Saturday, our brothers formed a team for the annual Big Event, and gave back to the Blacksburg community through volunteer work. We divided up into 7 small groups and tackled a list of 8 projects, including raking leaves, washing windows, weeding, and mulching (and Caitie and Veronique somehow managed to do a little yoga as well as cleaning). Overall, our group put in over 25 hours of community service while spending time together as brothers. Also, last week our brothers played in an intramural softball game on the first APX team. The game was called early for thunder, but the team pulled in a win, defeating the opposing team 7-5. Here’s the team photo from the game! 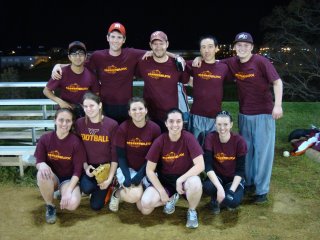 Rush week is underway at Virginia Tech! We have held informative meetings, complete with ice cream sandwiches and pizza, and we have bowled with the interested soon-to-be pledges! After interviews, as shown above, we have passed out the bids, and pin in is tomorrow, February 4, in Burruss Hall. We are so excited to be expanding the Metagenes chapter!